I have a problem with the BOS Client for iOS.

Sometimes it works for several hours, sometimes it turns off after two hours. It looks like the application is "killed".

After switching on the application, you have to select the profile again.

By the way, could the profile load automatically, like on the Andorid application?

The BOS client is set to connect manually over the LAN. But that doesn't matter either, I tried via ID too.

This is not an iPad or iOS problem. In the showroom I also have other systems and the application of a different solution may be active for months. When it loses connection, it displays "lost connection" on the top bar and automatically reconnects when it comes back. Almost imperceptibly to the user.

I guess it's not really rocket science to make BOS client work similarly.

I observe the problem with turning off the application both on the new iPad and on the previous generation. In two different locations, on two different servers.

It is similar with camera support.

Streaming on the iPad application does not work (Dahua, Doorbird).

If I insert snapshots from four cameras, the Windows client displays the lack of resources error after a few seconds, and the iOS client turns off (like a killed app). 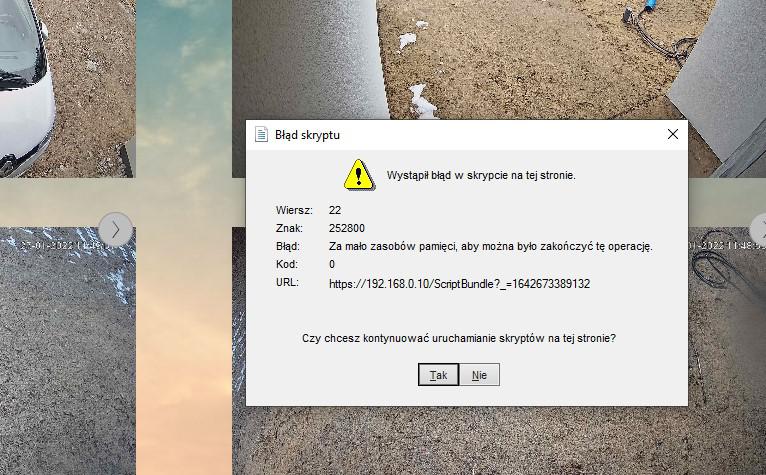 I know that on Android, the application may be set to sleep mode by the operating system, and sometimes become irresponsive. But that's a problem on Android, which turns to sleep certain apps. Usually, disabling the battery saving mode for bOS app, disabling restrictions on data usage for the app, etc, helps a lot. The option depends on the manufacturer, on Samsung is a little bit more hidden, Xiaomi is pretty straightforward, etc.

As for the iOS I can't say if it's happening the same, or if you have any option to let iOS not to manage/sleep the app. I'm sure that's somewhere on the settings of the device.

As for the streaming, indeed bOS team indicates that the best way for now is for us to stick to snapshots. Honestly, I don't have any problems with snapshots, only a minor glitch when using them, that makes the app reload a few times. But this issue is supposedly being investigated.

There is power management in iOS too, and this is disabled for BOS.

And the snapshots themselves don't work perfectly either.
As I wrote earlier and on the attached screen you can see the snapshots hang the windows client.

I would prefer a better polished app (especially for iOS) to artificially created new functions.

This is a product for my clients, I also have it at home. But I am not completely satisfied with the performance and possibilities. Customers also report problems.

If the app has to freeze, reconnect, the camera views work poorly. I have to take the time to do something that should work.
This is not a free solution.
This prompts me to look for other solutions.

Maybe I will come back to OpenHAB. Free cloud, better community support, no licenses, no fees.

That's your point of view, I have to disagree.

OpenHAB is a free product, community based support. I would never, ever, would use a community product on a professional installation. At home? Sure why not. At costumer's projects? Never. When I say OpenHAB, I also mean Home Assistant, whatever. Sometimes I use Home Assistant at home, just for fun.

As for the other things you listed: free cloud (both are free, you don't pay anything to use the Access ID, that's a free "bridge" just to let the system know where the server is located, kind of like a free ddns), no licenses (I don't have any license, I've paid one time only for the product), no fees (there are no fees on bOS).

When a product is community supported, like OpenHAB, HASS, etc, if there's a bug people don't get so angry as if it would be a paid product. After all, it's free, if you get angry probably those kind developers will sooner or later stop working of something they're not even getting paid for. I've used Home Assistant, and the KNX driver is so unstable that had to decide not to use it even at my home.

On bOS, the support team is waaaay smaller than everyone who's supporting those free products. So any fixes, takes time. Sometimes the problem is big, and they speed up the resolution, and if it's not much of a deal probably it would be postponed for later resolution.

As for the problems on bOS: yes, I know that there are some minor glitches on the their software. But I can live with them. I prefer not to use cameras on bOS, until they are 100% perfect. As for some other glitches, I wait patiently for their resolution. I'm not expecting for the team to stop development whatever they're doing, to implement something that's probably not even commercially profitable. If it's a real bug, then yes, sooner or later they try to implement it's resolution.

Don't worry if you don't get answers sometimes, they're listening. Of course there are some glitches, and either I try to go around, or decide not to use something, until it's fixed.

I have to say, that there are very few companies who listen to the installers opinions. I've worked with KNX manufacturers, that wouldn't even care if a device had bugs, they would literally "sh*t" in my face. So, just for the fact that this forum exists and we can sometimes get answers/fixes from Comfortclick, it's a good thing.

Btw, don't expect to move on to other product, and when you find bugs or small glitches to expect answers and resolutions from that manufacturer. It's a matter of luck. I work with bOS, because I've found ways to get a stable system for years. I try to avoid certain functions for now. I understand and share some of your frustration, but sometimes it takes time for the product to get polished.

I'm not affiliated with Comfortclick, nor I receive anything in return. I'm not defending anyone, it's just my opinion.

+3
Under review
ComfortClick Support 10 months ago

we are sorry to hear about your current issues with bOS. We are aware of the problem regarding our bOS Client app and displaying camera image.  We are aware of your frustrations we have also been system integrator for quite some time and we know how frustrating things may be if the they are not 100% functional.

bOS started (before known as Comfort Manager) as a simple visualisation software which was evolving quite fast and soon became much more than that. Because of fast scalling some things may be / left unpolished, unoptimized, but this polishing would require major overhaul of complete software as problems are popping out from deeper routes. We must also say that bOS 4 is also not a NVR solution designed for professional camera usage, cameras in bOS are mainly used for quick overview, because the delivery of live image feed is not optimized and our backend system, currently does not allow such advanced functionality.

We are aware our bOS client application could be more polished and working more smoothly like any other software application on the market.

Let me point out that bOS 4 is also not receiving all of our current focus, most of our resources and staff are focused on developing bOS 5 which is built from scratch, designed from the ground up and it will include all the latest technology wich will significaly improve communication, security, scalability, stability etc. In order to keep up with new technologies, systems and increasing project sizes we needed to start from scratch.

All current bugs / inperfections and issues (including camera streams) are being addressed inthe new wersion and you will see a significant improvement.

We are doing our best to listen to all of your feedback, improve and fix our software so everyone can have a better experience with that in mind we are planning future development of the product.